This is a guest post from our partners at Intervale
For more information, contact Eric Bennett, Newfoundland Marten Stewardship Coordinator, info@intervale.ca 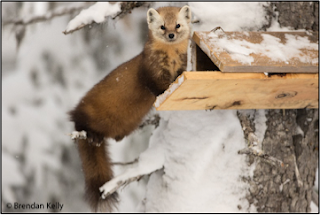 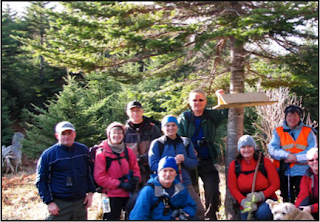 Hair Snagging in Newfoundland
Over the years, many people from a variety of organizations have been contributing to the recovery of this animal. Since 2012, Intervale has been coordinating the work of 90 volunteers, who help establish the locations of marten across its forested habitat in Newfoundland.

The methodology was developed by researchers in the Newfoundland and Labrador Department of Environment and Conservation, Wildlife Division. Marten are seldom seen, which is why an attraction method is needed. The technique is non-invasive and does not harm the animal. Volunteers collect hair samples by means of a wooden apparatus called a hair snag; it is shaped like a three-sided box and open at both ends. The device is fastened to a tree at chest height, baited with sardines, and made attractive to marten with the scent of skunk. If a marten visits the box, a tiny sample of its fur is left on sticky tabs that line the inside of the box. Volunteers monitor the boxes every 10-14 days, collect the hair samples, and send them to the Wildlife Division. Researchers test the samples for DNA, a process that enables them to confirm the presence of marten and to track individual animals. 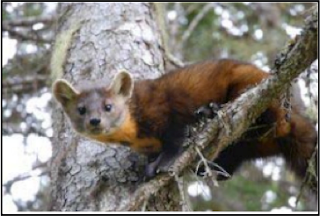 In 2016, a total of 84 hair samples were collected, of which 41 are suspected to be marten. With new samples coming in week by week, the number is always changing. These samples will be sent for identification. From these data, researchers are able to identify from each sample representing marten, the sex of the animal, and whether it represents a new animal or one that has been sampled before. As more people become involved, the information will continue growing and wildlife biologists will be able to determine that marten are gaining ground and showing up in areas where there was once none.

Thanks to greatly improved land use planning, the adoption of best management practices by trappers, wildlife management, and public knowledge, marten distribution and abundance are increasing. However, continued support for marten recovery efforts are needed. Intervale is helping the Newfoundland Wildlife Division in this work through the continued efforts of staff and volunteers, and by encouraging the best management practices among forest users in general. For example, Intervale encourages the best practices among snowshoe hare snarers, instructing trappers on how to build and use floating mink box traps, giving presentations to youth and adults, and distributing informational materials such as placemats. These educational efforts contribute to fewer marten being accidentally caught in snares and traps. They also enable people to learn more about how they can contribute to recovery of marten. 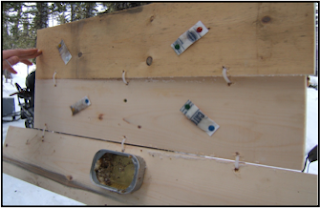 Movement of the Red Back Vole
The red back vole is one of the Newfoundland marten’s main food source. They are dispersing across Newfoundland and have been spotted as far as Brigus Junction in the east and as far north as Barr'd Harbour. It is believed that the quick increase in the population is one of several factors helping the marten population rebound.

How to get Involved


Intervale is currently looking for volunteers to participate in the hair snag program in the following areas:  South Branch, River of Ponds, Hawke’s Bay, Main Brook, Lewisport, Carmenville, Musgrave Harbour, Goobies, Badger, South Brook, Whitbourne and any of the surrounding areas. If you are a walker, hiker, outdoor enthusiasts, hunter, trapper, or just want to help the recovery of the Newfoundland Marten, e-mail us info@intervale.ca and we will get you started with all the supplies you will need for the season.
Posted by Sam Stewardship at 07:46 No comments:

Municipal Stewardship by the Numbers

Here at the Stewardship Association of Municipalities we have been working hard on updating our maps of Management Units across the province. With the signing of agreements in Indian Bay and New-Wes-Valley, we’ve now reached over 41 000 acres (over 16 700 hectares) of protected wildlife habitat! Great things can be accomplished when we work together and we’re proud to have worked with so many of you in achieving this impressive result. We thought we’d share some other fun facts  that we discovered while mapping management areas this winter.

If you ever have any questions or would like some updated maps of your stewardship areas, please don’t hesitate to contact samconservation@gmail.com – we are here to help.