The State of Canada's Birds - What can NL Learn

Thank you to our guest blogger, Alex Hayward for this submission. Alex is currently working as the Ducks Unlimited Canada (DUC) Summer Conservation Technician in the St. John's office, and in 2018 was the recipient of the SAM Scholarship, funded through the SAM Conservation Fund. She is a graduate from Memorial University with a degree focused on ecology and conservation. In her spare time she enjoys hiking and painting.


This past June, a new report assessing bird populations in Canada was released from the North American Bird Conservation Initiative in Canada (NABCI-Canada). The results appear to be both a call to action and a source of hope for Canada’s natural environment. 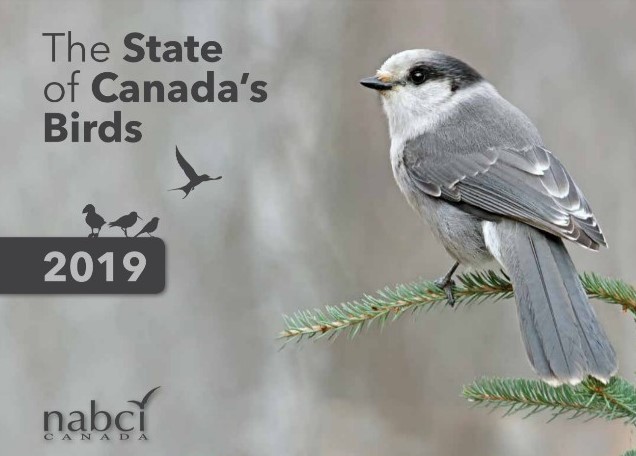 The report combined data from several sources, collected between 1970-2016, and separated the bird species into broad categories. The report hoped to reveal overall trends for different kinds of birds in Canada. The big take-away from the report was that it showed aerial insectivores (flying insect-eating birds), grassland birds, and shorebirds are, on average, rapidly declining in Canada-- signalling an urgent need for further conservation action.

Despite this, there is still good news for some bird categories, and proof that conservation action has made a difference. First, birds of prey populations in North America once suffered from exposure to chemicals like DDT. These chemicals are now banned in Canada, and the report shows that this bird category is indeed recovering.

Secondly, many conservation organizations (including the Eastern Habitat Joint Venture partners), communities, and other groups have also been working hard to conserve habitat for waterfowl, and this is the second category of birds that appears to be recovering.

Certainly, SAM member communities can feel good about their contribution to habitat provision for recovering waterfowl through Municipal Habitat Stewardship Agreements. But the report does have  implications for other birds species of this province. How can SAM communities learn from the report and support all bird conservation?  I took a closer look at the data to shed some more light on these questions. 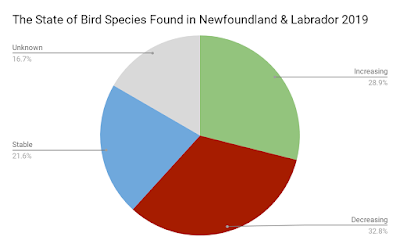 Looking at the bird species that can be found in Newfoundland and Labrador, we find that:
~30% appear to be increasing in numbers;
~22% are relatively stable;
~17% don't have enough data to be assessed.
However, there are at least 67 species-- or around 33%-- that appear to be declining in numbers, indicating that this province has an important role to play in bird conservation efforts.

When narrowing down to the waterfowl and other wetland species found in this province, we clearly still have lots to learn as over 30% or 16 of these species were determined to have insufficient population data available. This includes species like the Harlequin Duck and Barrow’s Goldeneye, which are both designated as Vulnerable in this province.

What the report can tell us is 20 of the wetland and waterfowl species are recovering, while 11 species are relatively stable, and four species are declining in numbers: Northern Pintail, Brant, Belted Kingfisher, and American Bittern. It is noteworthy, however, that the Northern Pintail data used in the State of Canada’s Birds report was only taken from the western part of Canada.

It should always be kept in mind that these numbers are estimates- but that does not mean we shouldn’t take them seriously. Memorial University conservation biology students released a class report this past winter semester that gives an overview of the state of biodiversity in Newfoundland and Labrador. It includes an analysis of Breeding Bird Survey data for 112 species found in the province. They concluded that between the period of 1976-2015, there has been an average decline in bird populations in the province. Wetland birds, they reported, had been decreasing on average until 1980, were stable for 20 years, and have been increasing since 2002.

The State of Canada’s Birds 2019 also uses the Breeding Bird Survey data in addition to other sources like the Christmas Bird Count and other surveys focused on more specific categories of birds.

In general, birds are difficult to track and count, the sources of data on Canada’s bird populations can vary, and there can be different approaches to analyzing data to determine estimates. As with any area of science, there are information gaps and room for errors, but researchers are confident we do know enough to give a general idea of how bird populations are changing.

The graph below is my analysis of the NL data found in the State of Canada's Birds report. It shows the overall trend is the same here as it is across the country with similar proportions of birds being stable and declining, and with the most at risk being aerial insectivores, grassland birds, and shorebirds. 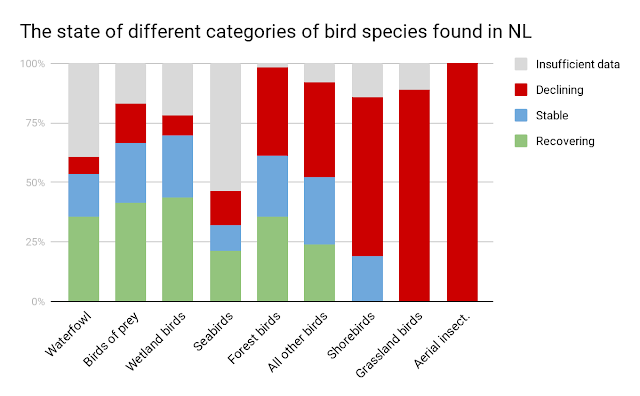 We know that more efforts are needed especially for aerial insectivores, grassland birds, and shorebirds, but we also know that conservation efforts work. What’s more, when we protect bird populations, we are also protecting habitat for other creatures, including ourselves!

SAM Communities can support conservation efforts by keeping an eye out around protected wetlands for these bird species & reporting any sightings on eBird. 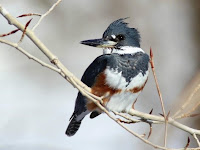 This bird breeds in NL and likes to hang around wetlands, especially in the early fall. The species has undergone a 34% decline over the past 4.5 decades, according to Breeding Bird Survey data. 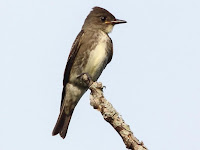 This bird nests around NL’s beaver ponds and bogs where there are an abundance of aerial insects that it relies on for food. Wetland habitat also provides them with dead or dying trees that serve as perches for singing, foraging, and watching for predators and rivals. The species has undergone a 66% decline over the past 4.5 decades, according to Breeding Bird Survey data. It is listed as Near Threatened by the IUCN, and legally designated as Threatened under both Canada’s Species at Risk Act and NL’s Endangered Species Act.
Where can you find this bird? * Forteau, Deer Lake, Corner Brook, Stephenville, Gander, and beyond.

This bird eats flying insects and can be seen stopping around NL marshes during migration in the fall. You can also see them in the summer months. According to the Breeding Bird Survey, the species has undergone a 63% decline over the past 4.5 decades. They are legally designated as Threatened under both Canada’s Species at Risk Act and NL’s Endangered Species Act.

Where can you find this bird? * Channel-Port aux Basques area (e.g. Cape Ray, JT Cheeseman provincial park), and beyond!

This bird breeds in NL and hangs around the wetlands that it depends on for food and nesting. It is hard to see but you can often hear them, especially between May and July. The species’ population numbers in Canada have undergone a 33% decline over the past 4.5 decades.

After breeding, this bird can be seen around freshwater marshes in the summer while undergoing its’ annual molt, or it can be seen in the fall. It migrates south after this, covering distances of around 20 000 km! The species has undergone a 70% decline over the past 4.5 decades. It is legally designated as Threatened under SARA and Vulnerable under NL’s ESA.

Where can you find this bird? * Happy Valley-Goose Bay, Forteau, Flowers Cove, Deer Lake, Grand Codroy Estuary, St. Lawrence, St. John’s, and beyond… but I have yet to be spotted this year! 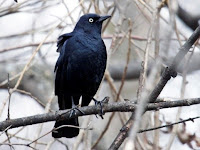 86% of the global population of this species breeds in Canada. It sometimes breeds in NL’s wet forests, including areas with fens, bogs, and beaver ponds. You are more likely to see it here between May and August.The species has undergone a 66% decline over the past 4.5 decades, according to the North American Christmas Bird Count data. The IUCN lists the bird as Vulnerable. It is legally designated as Special Concern under SARA and Vulnerable under NL’s Endangered Species Act.


Where can you find this bird? * Happy Valley-Goose Bay, Forteau, Flowers Cove, Deer Lake, Gander, St. John’s, and beyond! 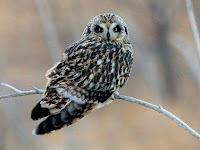 This bird breeds in NL and can sometimes be spotted around fresh and saltwater marshes, especially between June and August. The species has undergone a 90% decline over the past 4.5 decades, according to the Canadian Christmas Bird Count data. Conserving habitat is super important for this bird! It is legally designated as Special Concern under SARA and Vulnerable under NL’s Endangered Species Act.

Where can you find this bird? * St. Anthony and beyond! You can report sightings directly to the Department of Fisheries and Land Resources using their incidental reporting form. 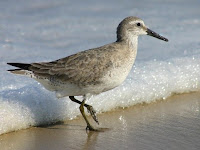 This bird nests in the high arctic and migrates to NL in the late summer and fall. It can occasionally be seen at lake shorelines or freshwater marshes. The species underwent a 90% decline in population during the past 4.5 decades, according to Shorebird Migration Monitoring data. It is listed by the IUCN as Near Threatened and legally designated as Endangered under the SARA and NL’s Endangered Species Act.

Where can you find this bird? * St. Anthony, Port au Choix, Stephenville, Grand Codroy Estuary, Gambo, Bonavista, Frenchman’s Cove, Come by Chance, St. John’s, and beyond… but I have yet to be spotted this year! 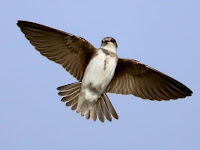 This bird breeds in NL and you are likely to spot it between May and August. It eats flying insects and sometimes hangs out with other species of swallows. The species has undergone a 95% decline in population over the past 4.5 decades, according to the Breeding Bird Survey. It is designated as Threatened under SARA.

Where can you find this bird? * Forteau, Channel-Port aux Basques, Grand Codroy Estuary, St. John’s, and beyond!

*SAM communities where sightings within or nearby them have recently been reported through ebird.

What else can we do to help NL’s birds? SAM member communities can support conservation through stewardship of our bird species by letting residents know they can make a difference! Check out our list of stewardship activities you can do in your community.

2) Enhance bird habitat in our backyards:
3) Help create a clearer picture of bird populations by participating in citizen science efforts: